I hadn’t reviewed the iPad for a couple of reasons. First, I don’t personally have one. And secondly, there’s a ton of reviews online for the iPad. Recently, however, a friend of mine spent three weeks visiting Vietnam and Singapore with his wife. I knew he was taking his new iPad 3G with him, so when he came back, I asked him what his experience was like. I specifically wanted to know, based on his experience, whether an iPad is a friend to the traveliter, or just an extra gadget you don’t really need.

Since this trip was half-pleasure and half-work, my friend Dmitri was a little apprehensive about how it would withstand his business needs. Not all applications that he normally uses on his computer have an exact complement on the iPad (he gives the word processor as an example of an app that isn’t perfect), but because only half his trip was work-related, he was willing to set his requirements lower—the iPad’s form factor won out for him, especially after he decided to spend extra for an overseas connectivity plan through AT&T (he chose the 100MB plan for $119.99, although there are others).

One big difference for Dmitri was that while he traveled everywhere with his laptop, he always had to find a safe place to stash it in his hotel room. With the iPad, he discovered that he could put it in his daypack and take it with him everywhere. In the past, when he took his laptop with him during the day, he would carry a laptop case, which after packing power adapters and various cables, didn’t allow enough room to use as a regular daypack.

On one of the days, his iPad came in handy when his wife wanted a massage. “We had no idea where to find a good massage. All the signs are in Vietnamese, and we had no idea where to start,” he said. They finally decided to use the iPad. “I typed in ‘massage’ in Google Maps, and up popped seven or eight different massage places nearby. We would’ve never found them on our own.” His wife got a really good massage “for a fraction of what we’d pay at home,” he said. 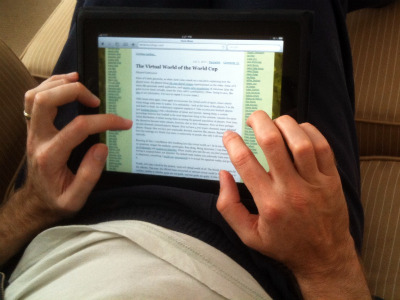 Dmitri quickly checks his iPad to find out the latest information about World Cup soccer.

A soccer fan, Dmitri also found it very easy to keep tabs on how the different teams were doing in the World Cup throughout the day. On one such break while he was traveling with his tour group, he decided to call home to California to see how his kids (who were staying with relatives) were doing. Instead of renting an international cell phone, Dmitri just used Skype on his iPad and made the call for free. He asked his tourmates if anyone else wanted to call home… and between the novelty of using an iPad to talk on the phone, and being assured that the calls were free, everyone in his tour took turns talking to their families back home. “There was one Scottish guy on the tour who didn’t even know what an iPad was,” he said. “We finally talked him into giving it a try, so he called his mum back home. And his mother couldn’t believe her son was phoning all the way from Vietnam—it was great!”

For Dmitri, the iPad wasn’t as good for taking notes. For that, he said, he just used paper. He could see a laptop as necessary for some business travel; some companies use proprietary software that only works on some operating systems, while some people need very robust business software (like spreadsheets or databases) and actually crunch their numbers during their business trips. But for most everything else—Web, e-mail, generic business tasks—he found the iPad to be superior for his work needs. And the simple fact that he didn’t need to carry a separate laptop bag made travel that much easier.

Dmitri found that his iPad was excellent for self-entertainment. Although he owns an Amazon Kindle book reader, he downloaded the Kindle app for his iPad, and left his Kindle device at home for this trip. “I’m currently reading The Passage (a New York Times bestseller about vampires, by Justin Cronin),” he said. “It’s roughly 800-pages long, but it’s no problem carrying it in the iPad using the Kindle app.” For this trip, he also downloaded episodes of the TV show Dollhouse, as well as some movies, music, and games. In the past, Dmitri had to juggle carrying all sorts of things on trips while still trying to pare down his belongings to minimize his luggage. For this trip, he fitted everything into his iPad.

Battery life was not a problem for him, even though he faced 15-hour flights and 20-hour transits for this trip. “I watched a couple of movies, some TV shows on the flights,” Dmitri said. When he was ready for a nap, he would turn on some music and nod off while wearing his noise-cancelling headphones, and his iPad still didn’t run out of battery. “We found that it took longer to charge the iPad than the iPhone, so we always charged the iPad overnight,” he said.

Although Dmitri would recommend the iPad, he agrees it’s not necessary for everyone. He said, “If you’re a guy and you don’t carry a bag at all, a smartphone like an iPhone is OK, since you can still do a lot of the same things.” However, he noted, “I would recommend the iPad for anyone who carries a daypack during the day. The iPad is so light; lighter weight with less bulk. I was able to take everything in my daypack, including water, sun hat, snacks, travel pillow… in addition to my iPad.”

After looking at over 70 cases online, he finally chose the official Apple iPad case. “I found that the simple one was the best,” he said, noting that the sleek case was small enough to easily slip into his daypack. 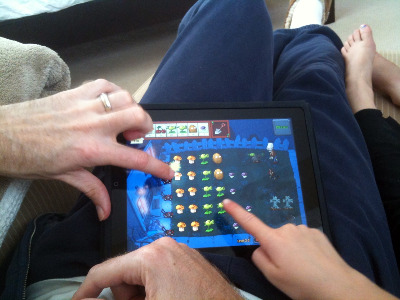 Dmitri and his daughter play a game of Plants vs. Zombies together on the iPad.

After using his iPad at home (playing Plants Vs. Zombies with his young daughter) and taking it on his overseas vacation, Dmitri calls the iPad “an infinite Swiss Army Knife.” Easier, better, and more convenient than a laptop or even a netbook, the best thing about the iPad, he says, is that it is most useful when you don’t expect it. “It’s when you don’t know something, when you’re disoriented, that it comes in handy,” he said.

Dmitri Williams is a university professor. He lives in Southern California with his wife and two kids.
Logging In...