If you’re like me, you take a small list of items in your carry-on that most travelers don’t bother packing. Whether your handy item is a diaper pin (to pin your sweater on the seatback in front of you on the plane or to pin your ID tag inside your carry-on) or a small container of baby powder (to keep your feet from feeling too sweaty when it’s hot, or lessen the greasy-haired look if you can’t get to a shower for another day), these small items take up very little room but can be very handy and have multiple uses.

One of those really handy items is a roll of adhesive cello tape. Most of us are most familiar with the Scotch brand. Scotch tape can be immensely helpful when traveling. Besides keeping paperwork together when you don’t have a stapler, you can use strips of these as a lint remover, cover up a small cut when you don’t have a bandage, prevent a snag in your clothes from getting worse, provide endless entertainment for a toddler on a plane, and so on.

Honestly, the only inconvenience about a roll of Scotch tape has been its dispenser. The zig-zagged edge made cutting the tape handy, but the cutting end stuck out, and took up a lot of space; space you don’t want to give up when you’re traveling with just your carry-on.

Manufacturer 3M has come to the traveler’s rescue with a brand new Scotch tape dispenser in the form of a plastic donut. 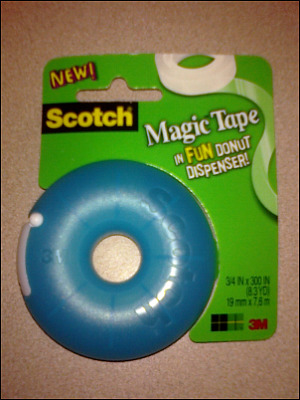 A quick glance shows an obvious difference to a regular tape dispenser. This is a completely enclosed, round plastic donut with no extraneous parts. 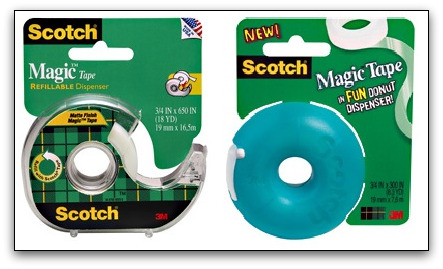 A traditional dispenser (left) next to the new Donut dispenser.

The convenience for travelers is that the donut dispenser can be tossed into your carry-on, but can also just as easily get tethered to your bag  using a short string or bead chain. As an added convenience, having a brightly colored plastic ring on your carry-on gives you a quick and easy way to identify your bag as yours.

You’re probably looking at this donut dispenser and wondering how the dispenser actually works. Is it just a plastic ring with tape inside, that you have to untwist to get to? Nothing so difficult. If you look closely, you see a white tab on the dispenser. That’s the opening. On the top of the white tab on both sides are two little round nubs of plastic, which you flick to open the tab. The tab itself is hinged, so when you flick the tab open, the little jaw opens up and shows up a peek into the inside of the dispenser.

Inside, is a standard roll of Scotch tape with the familiar green checkerboard bit of tape that indicates the start of the roll. The plastic dispenser consists of two halves of a donut; just wiggle it a bit and pull the two halves open. Once you open the halves, just pull the starter tape out and pull it onto the white tab. Close the halves up again, and you’re set to go. 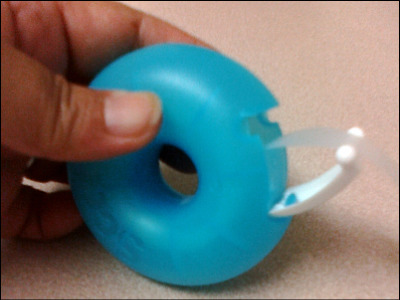 The white tab acts as the dispensing portion of the donut.

Whenever you want to use some tape, just open the white hinged tab. Pull out whatever amount of tape you want, cut it on the jagged edge of the white tab, then snap the white tab shut and you’re good to go. The white tab snaps into place and will not come open on its own, but it can be easily unsnapped and unhinged with one thumb or finger.

You’ll read some negative reviews of this product online, but it looks like people get frustrated by overthinking this product. Some people aren’t happy that you have to fold the tape away before you close the tab, some people aren’t happy with the smaller roll of tape it comes with. The thing is, you don’t need to do anything with the tape before you shut the lid. The tape end stays stuck right on the teeth of the white tab, and the extra tape just folds over naturally when you shut the tab. 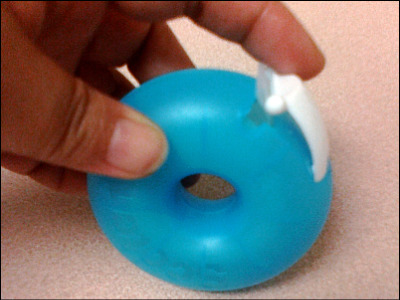 Once you're done with your tape, just snap the white tab shut.

The best thing about this new donut dispenser is that it’s refillable with a standard sized roll of tape (of either the 1/2 or 3/4 inch variety); no need to find special tape for this dispenser.

Scotch sells a number of other special dispensers, including pre-cut pop-up tape dispensers. I’m not too keen on that one because, although it’s handy, it limits the length of tape you dispense at a time, and inch-for-inch, costs considerably more than a regular refill roll of tape.

The Scotch Magic Tape with Donut Dispenser comes with a roll of 300-inch tape. If you plan on using this a lot on your trip, you might consider swapping it out with your own larger refill roll. The dispenser comes in a variety of bright colors (purple, turquoise, lime green, pink, red), and you can buy it at most office supply stores for a few bucks. If you have trouble finding this at your store (in my experience, these seem to sell out often), pick one up online at Amazon, Office Depot, or any number of online stores.