It’s the Swedish Chef from the Muppets, here to say Happy New Year everybody! This blog has been poorly neglected, but with the start of 2012, we’re going for a recharge here.

So… besides a phrase that the Swedish Chef likes to say, a spork is an eating utensil that combines the tines of a fork and the bowl of a spoon.

There are a number of different models of sporks on the market (there doesn’t seem to be one uniform design). Most of them are basically “tined spoons”; that is, the tips of a standard spoon have cuts in them so you can poke at your food with your spoon.

The problem with this kind of tined spoon is that it’s not very good at stabbing at food, and you can’t spoon up much because the spoon is basically slotted at the end.

One spork, however, uses a very different design, and it works really beautifully.

Light My Fire manufacturers camping gear designed for the light packer. One of their signature products is their Spork. What makes this spork different from others is that it doesn’t compromise a spoon by slotting tines to it; instead, you get a spoon on one end, and a fork on the other. This very simple concept means you get a “real” spoon, and a “real” fork (you just can’t use both at the same time). 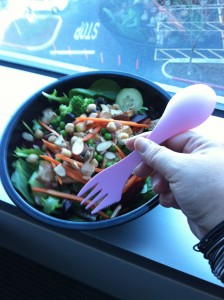 The fork end of a Light My Fire Spork.

It might be hard to see, but the tine closest to you (on the leftmost tine) is a little wider than the rest. This is because the outside edge is lightly serrated, allowing you to cut your food. If you need to cut your food, though, it’s a bit of a challenge without a second utensil, so I sometimes find myself having to hold down the food with my left thumb.

The tines on the Spork are also relatively shallow when compared to a normal fork; it’s too bad they can’t just make the tines a little longer by cutting deeper into the fork. You wind up taking smaller bites with this fork.

Since its introduction years ago, Light My Fire has expanded its Spork line with a lot of new models. One big issue they’ve resolved is that the Spork is now usable by left-handers. They now have a “Spork Lefty” model that has the serrated the on the right edge.

Folks who don’t really care for the feel of plastic utensils now also have the option to use the titanium model of Spork. Dimensions and everything are identical to the original Spork, but the titanium model actually feels much better in your hand because it’s thinner. Cutting food with the serrated edge feels a lot easier, as well. Unfortunately, it looks like a left-handed version is not yet available in titanium.

Finally, if you’re a hardcore light packer and want something small enough to keep in your shirt pocket, you might consider Spork Little. Designed for kids, it’s basically a teaspoon version of the original Spork. Everything looks the same, but smaller. The Little model also lacks a serrated edge on the fork.

You should be able to find these Sporks in various camping outlets like REI. The original comes in 20 colors, and is pretty affordable at around $3 each (the titanium model will set you back around $13). Be careful what color you choose, though. I used to have a clear one, and while on vacation, it got tossed out in the trash by a thoughtful husband who just assumed it was a clear disposable fork. My suggestion is that you get a color that doesn’t look anything like disposable utensils (and maybe even write your name on its handle).

Oh… you might be wondering why I’m reviewing a spork. After all, how does this relate to packing light? Well, sporks don’t take up much room, and it lets you use your own eating utensil instead of wasting plastic disposables. I always carry one of these in my purse (as well as a sturdy reusable drinking straw).